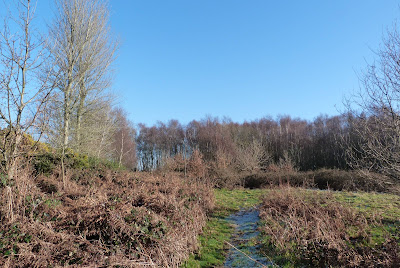 A couple more visits to the wildlife plot over the past few days. Even the padlock to the field-gate was frozen yesterday morning so had to boil a kettle to unlock it before I could get the van up to the barn.

Photo (left) of overgrown upper meadow (pre today's snow!) with the background silver birches marking the little bluebell wood. It's a great bird and dragonfly plot, sandwiched between open, rolling (species-poor!) farmland to the north and the woodland and park-like grounds of Herstmonceux Castle to the south. The Pevensey Levels are 500m away to the west.


Eventually trebled the invert count by adding a rather dormant Daddy-long-legs spider (Pholcus phalangioides) – one of many lurking in the workshop – and a Common rough woodlouse (Pocellio scaber). Molluscs were off the mark with a frozen Brown garden or Common snail (Helix aspersa). Three more birds yesterday: Pied wagtail, Marsh tit and a Common gull in the field next door plus a flock of ten Long-tailed tits (already on the list), the latter slightly more predictable than Sunday’s flock of thirty-five (!) Blue tits and twelve Great tits around the plot. Unfortunately, a dead House mouse (Mus musculus) drowned in a bucket inside the workshop, was only the second mammal species to date. And talking of dead things, I haven’t yet cut down pond-side vegetation so last summer’s Milk Parsley and Purple Loosestrife stems and seed-heads were still visible. 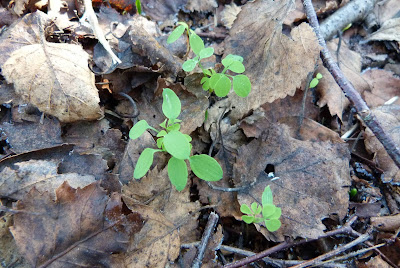 No surprise that the species list is top-heavy with plants although what looks like Three-nerved sandwort (left) in the bluebell wood is a totally new addition.
It may well be common here but I hadn’t identified it until now (thanks to Ralph Hobbs via the Wild Flower Barn's Facebook page). 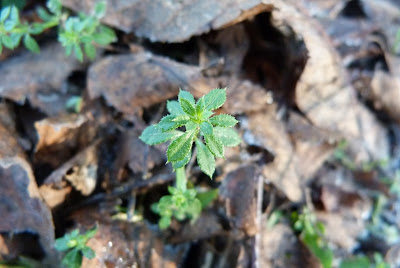 Another small mystery plant in the bluebell wood is possibly one of the bedstraw family (below left) but its ID is puzzling me for now – don’t think it’s Cleavers so possibly Heath Bedstraw (Galium saxatile) or maybe even Field Madder (Sherardia arvensis) - but the latter less likely despite some species-poor grassland/open fields only 20m away. 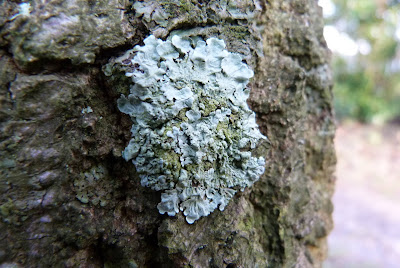 One of the good things about this challenge is that it’s forcing me to identify things that I’ve only glanced at for years and years (hope I’m not the only one). Must admit I’m struggling with mosses and lichens, the latter on silver birch in the bluebell wood looks like the very common Parmelia subrudecta but after the dung beetle mis-ID last week, anything’s possible. 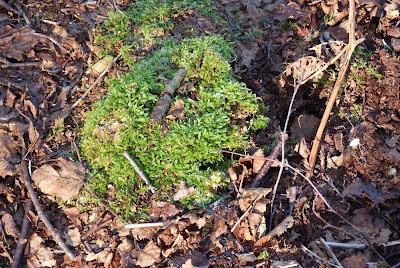 The same goes for Brachythecium rutabulum on silver birch stumps (feel free to put me out of my misery if incorrect). These two taxa are forcing some in-depth head-scratching and a lot of GOOGLING. 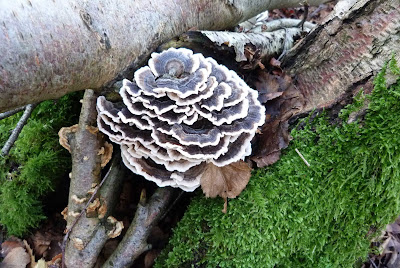 Last week’s mystery fungus was just another example of the common Many-zoned Polypore (Coriolus versicolor).  I’m still using my thirty year old Roger Phillips’ guides (the man himself is probably a little older - is he still alive?) for ID-ing fungi, trees, grasses, rushes & sedges, mosses & lichens – even some wild flowers - so if the names are a bit old-school, that’s probably the reason why.


The overall count's now up to 153 species but with snow falling heavily in East Sussex this morning and as I'm now confined to survey write-ups in Ashdown Forest where I’m cottage-minding/house-sitting, that total's likely to stay put for a few days at least ……     Mike M.   18th Jan 2013